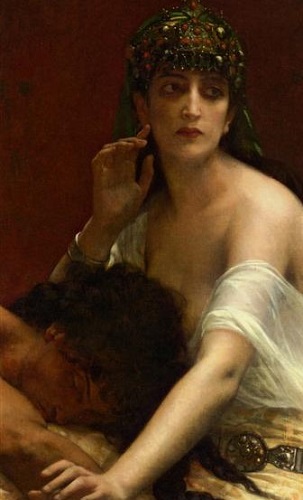 “Delilah:” The Furthest Thing From Flowery

Kanehara Hitomi’s “Delilah,” tells the story of a woman’s experience with starting a new job at a bar. In the story, the main character, Yu Kanda, deals with problems in her new workplace because of how she was treated by the men working there. Here are two examples of issues that Kanehara integrates into her ... read more

Kanehara Hitomi’s “Delilah,” tells the story of a woman’s experience with starting a new job at a bar. In the story, the main character, Yu Kanda, deals with problems in her new workplace because of how she was treated by the men working there. Here are two examples of issues that Kanehara integrates into her story, one of which is much tamer than the other. One of these is Yu Kanda’s work uniform. Kaizu, one of the other workers at the bar, gives the main character a tight skirt to wear, demonstrating some of the hypersexualization of women that takes place in the workplace. This is further exemplified at the end of the story through a graphic scene in which Yu Kanda receives oral sex from Kaizu while her other coworker looks on in a sexual context. The whole scene is jarring with there being very little to no consent from Yu Kanda, leaving the reader with questions about everything that went on in the story.

With such a graphic scene in the story, is it worth reading? My answer is a strong yes. Through my readings of other feminist texts, some of the most impactful are often the ones that are the most graphic. While the scene is certainly off-putting, it makes the reader consider the ways women are treated in the workplace and by men generally. Furthermore, reading the story serves as a strong introduction to Kanehara Hitomi’s works, who is one of the most famous female writers in Japan today through her unabashed usage of sexual and dark themes in her writing. While this story is not suited for children, mature readers should consider reading the story through the ways it insights critical thinking of important feminist themes.

[5/9 12:40 PM] Flores, Miya
5/9: I too thought the story was disturbing. I want to know more about mental health in Japan. Japan is known for its hard work ethic and long hours in both school and work life, but how does that affect mental health? Furthermore, does being a woman and not fitting the standard of “hard work/intelligence” self dictate their worth in comparison to men. If so is there a difference between consequences due to gender?
Edit Reply
One mention that really caught my eye was the main character's mention that she wasn't smart enough to work a desk job, therefore had to rely on physical labor. I thought that this spoke volumes about the state of Japan at the time with the salaryman, etc. Was this Kanehara's criticism of the Japanese economic system?
Edit Reply
Edit Reply
5/9: This is yet another disturbing story, but unsettling in a different way. Many of the fictional works that we have read are fantastical; "Delilah" is realistic. What I found most disturbing was that Yu continued to serve new customers even while being sexually harassed. Was this commentary on how normalized/common sexual assault of women has become?
Edit Reply
I grew up working in different bars in high school and can confirm the events of the story are not at all a work of fiction. What did pique my interest, however, was on page 193 when Yu reflects that women in more prestigious jobs have a greater right to get upset because they are "more intelligent." I would like to know if this was meant to be a sarcastic statement or if it was meant as a critique on social perceptions. On one hand she could be saying that women in entry level or part time jobs are more likely to face these realities of harassment and lack of concern of others for it. On the other, she could be implying that the problem of harassment is a universal one among women. I personally feel it could be a bit of both.
Edit Reply
I'm curious about the part at the beginning where the narrator describes a dead man in plastic and how that relates to the rest of the story. The narrator's mental illness seems to impair her judgment and leads her to put herself in dangerous situations such as working at the bar despite some red flags. Who is the man in the bag and does it matter in the story or is it just another example of the narrator's dark and sexual imaginings?
Edit Reply
How does the story's representation of depression reflect the social view of mental health in Japan?
Edit Reply
I am curious about the man who is dead in the beginning, maybe did he symbolize a warning for her for the dangers that lie ahead? She also comments on how she has to withstand sexual harassment because she is not as intelligent as other women in high paying jobs. I wonder why she thought that? As well as the reasoning behind "we can hire you if you're a girl" is unsettling. It seems the men in the story had intentions to do this or have done it before, considering they were looking for women to harm and yet still blame her for being harassed.
Edit Reply
This story was disturbing to say the least but I think it comments on the sexualization of woman in the workplace very well - particularly by people who are seen as heirarchially higher then they. It is unfortunate that this is a fairly accurate depiction to real life situations and I wonder what the author meant by the gin and tonic symbolism? I am also curious about the name of the bar - in what way does this play into the underpinnings and themes of the story?
Edit Reply
I am drawn to the inclusion of mental health in the story. Through my research, I have not found much about Kanehara using this theme. Was mental health included with the intention of societal recognition or was it just a part of the story?
Edit Reply
Daily Question: Similar to the general consensus, this story was unsettling. I would like to know more about how the story was perceived by the general audience.
Edit Reply
5/9: Was it normal for women to automatically be accepted into jobs at bars because of their sexuality?
Edit Reply

This YouTube podcast episode gives a glimpse into the public opinion of Kanehara Hitomi’s “Delilah.” The four podcast hosts describe their experiences with reading the story. All of the hosts expressed how shocked they were to read some of the sexually explicit details of the story. The hosts continue to discuss other important plot lines and themes in the story throughout the podcast episode. This podcast is useful because I believe that the opinions of the four hosts serve as excellent examples of how people react to Kanehara Hitomi’s “Delilah.” The sexually explicit details are certainly jarring to the reader, and the inclusion of these details is important to understand and discuss.

In the piece, David Holloway discusses how Kanehara Hitomi incorporates gender politics in her writing. Holloway describes a concept of “gendered scripts,” which are the societal expectations of how a woman should live her life. Kanehara’s characters in her stories grapple with their agency, which serves as a societal critique. These characters express their displeasure with the societal gendered scripts in many ways, such as body modification through tattoos and piercings or purposeful food refusal and eating disorders. Holloway furthers his analysis of Kanehara’s work through the discussion of the sexual elements in her writing. The unconventional sexual practices seen in Kanehara’s work serve as yet another example of her critiquing the Japanese gendered scripts of the time. Holloway ends his piece by discussing how Kanehara’s characters often pursue conventional gender norms towards the end of their stories despite showing displeasure with the societal gendered scripts. The characters find that living according to these standards affords them security. The characters come close to breaking the gender scripts but fall just short. Holloway concludes the piece by describing why he views Kanehara’s writing in a positive light despite the gender scripts not being broken.

In the piece, David Holloway discusses and analyzes how the female body is portrayed and used in Kanehara Hitomi’s writing. The first symbol Holloway discusses in Kanehara’s works is body modification. In Kanehara’s Snakes and Earrings, the protagonist Lui uses body modification in the form of tattoos and piercings as a form of protest against presuppositions and societal expectations and labels. In the same story, Holloway discusses how food refusal is used to illustrate societal expectations and pressures on the female body. While Holloway does not directly discuss Kanehara’s “Delilah,” the themes from Snakes and Earrings carry over. These themes play an integral role in the discussion of Kanehara Hitomi’s works as feminist texts. Holloway’s analysis is particularly insightful because of the way he uses cross-examination. Holloway looks into some of Hasegawa Junko’s writing to compare how the body is used by authors who are considered to be feminists. The comparison provides a very tangible way to examine how the body is used in fiction to display how society pressures women.

This blog article discusses whether or not Kanehara Hitomi’s writing served as inspiration for Fuka-Eri, who is one of the characters from IQ84 written by Murakami Fukaeri. Kristin Dian Mariano begins the piece by providing a brief review of Kanehara Hitomi’s Snakes and Earrings. Dian Mariano was critical of the piece, explaining that she was surprised that it won the Akutagawa Prize. The author compares Kanehara Hitomi’s life experience alongside Snakes and Earrings with that of Fuka-Eri, who has a similar story to that of Hitomi’s. This comparison is intriguing because it illustrates the ripple effects Kanehara Hitomi had throughout Japan. While Fuka-Eri may not directly be based on Kanehara Hitomi, the similarities are striking. This non-academic piece was interesting to read, but the lack of evidence to support that the author of IQ84 drew inspiration from Kanehara Hitomi is concerning.