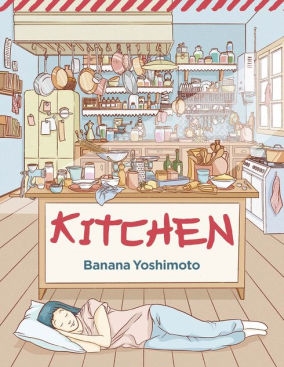 Forget the Are they Couple? I am in love with Eriko

“I am beautiful! I am dazzling!… Believe in the me that you knew (Kitchen, page. 49).”  Grief is painful, and strange, and paralyzing, and confusing, and long. It drives you to lay around and do nothing, stare at the wall, and have no thoughts as the light outside disappears as it does in your spirit. ... read more

Grief is painful, and strange, and paralyzing, and confusing, and long. It drives you to lay around and do nothing, stare at the wall, and have no thoughts as the light outside disappears as it does in your spirit. Banana Yoshimoto’s Kitchen () is a story of how a young woman, Mikage, processes this overwhelming grief. She finds the kitchen as her only place of solace and comfort. There she lies on the kitchen floor with the fridge doors open, just being. A state that everyone can empathize with and feel for the woman who was now alone in the world.

Kitchen is a journey with Mikage on how she moves from the kitchen floor to the couch next to the kitchen to working in the kitchen. She did not get up from the floor by herself, Yuichi Tanabe, her classmate in university supported her as she grieved over her grandmother and him, his favorite customer. Mikage then meets Yuichi’s mother Eriko, who is a transgender woman, and thus begins the transition from strangers to friends between Mikage and Yuichi. Many read this novel specifically for Mikage and Yuichi and see their relationship as the endearing and sweet, which it is in my opinion, and how Banana (1964-Present) makes the reader feel warm and fuzzy is reason enough to read her book.

However, I would not recommend this book just for their love. The real star that captured my attention, as she should yours, is Eriko. She is the symbol of how Banana Yoshimoto’s Kitchen is a trailblazer in literature in empowering women. She is grace and strength and no societal expectation of what a woman should be, will hold her from shining. Not since Torikaeba, a 13th-century Monogatari from imperial Japan, have transgender characters been main characters in a story. The debate in scholarly circles is questioning the reason behind Banana writing Eriko as a transgender woman. Marketability? Queer-bating? A character? We do not know and the answer to this question is up to the reader to decide. With this, I caution the Transgender community on the language others describe and speak to and about Eriko. There are many occurrences of misgendering from her son and she suffers pain, which many in the Transgender and LGBTQ+ community have experienced, because of her identity. This is not a book that escapes the unfortunate realities Transgender folk face, so if that might upset you, then this book is not the best option. While the novel centers around Mikage and Yuichi, Mikage's grandmother and Eriko play a major role, Eriko’s energy is infectious and to me makes her the reason to read this book. How she carries herself is as an inspiration and a paradigm for women.

I like to believe Banana writes Eriko to bring attention to society's problem of the lack of acceptance. Eriko is a kind person and she stepped up as a mother when Yuichi’s mother died and took in Mikage during her time in need. Mikage remembered this and repaid her kindness when Yuichi needed someone the most, so the love story everyone loves would not have been possible without Eriko. She helps Mikage and the audience think of their shine and uniqueness, and no matter the pains we endure, never let grieving prevent you from dazzling.

The purpose of these pieces is to reflect the Anglo-Americanization of translated Japanese texts and how they attempt to mold Banana’s Yoshimoto’s Kitchen into a more acceptable Western model through political correctness and readability, which misrepresents the characters in the story. Ohsawa argues that the English version of Kitchen suffers from censorship due to the translator’s choice to modify the writings to be less offensive to their audience. Ohsawa compares Kitchen’s French and German counterparts and how their translators kept the phrase “gay New Yorkers” to maintain the “faithfulness to the source (pg.39).” Banana used the phrase to contrast the timidness of a character to that of “gay New Yorkers,” which the English translator recognized as offensive to some and thus scrapped the phrase. Japanese authors’ works are molded to fit into the specific audience’s societal expectations, which fuels the disconnect between the original and the translation. Ohsawa writes to readers of Japanese literature and translators to bring attention to the common problem of translating popular stories. He leans on the side that original Japanese works are better and more representative, so to properly understand, one must read the original version. This critic’s perspective does limit much of the audience, considering that not everyone can read Japanese and that as a Japanese native it makes sense for Ohsawa to side with the Japanese version. I do agree that translations can distort a story, but this further demonstrates how much the quality of translation matters. Translation is more than switching words from one language to another, it is about, capturing the meanings and emotions of the text. That Kitchen translation that, Ohsawa analyzed, failed to capture Mikage’s speech style, indicating that when selecting the version of Kitchen or any popular non-English work, one must choose carefully. It is important to note before trying to gain more understanding of the novel, the gap language and society have caused in scholarly works and analyses of the novel.

Continuing on the qualms of translating, Furukawa compares different book covers of Kitchen and points to how non-Western works are forced to abide by western cultures’ existing beliefs for marketability. The packaging of Kitchen is intentional and acknowledging the unfortunate stereotypes non-western cultural items endure allows the readers to unlearn the subtle censorship and racism in the literary industry. Furukawa looked into the American, English, and Dutch book covers, and compared them to the original Japanese book cover, the Western designs were curated to achieve a familiarity for the audience.

The Japanese cover presents a story of a young Japanese woman navigating the ambiguous relationship between love and death. We typically associate black with death or a funeral, so the black and white theme represents the grief Mikage experiences from her grandmother’s and Eriko’s death. Their deaths brought Mikage and Yuichi together to form a relationship and they both support one another in their grief. Their relationship is represented through black flowers as a reminder of how Mikage’s grandmother and Yuichi’s mother's deaths were key events in furthering their relationship. Mikage struggles with separating her grief and her love for Yuichi beyond the deaths and at the end of the novel, the reader with Mikage wonders if she loves him romantically. While the American version Americanizes Mikage by having her wear an outfit one could see any Western woman wear and thus transforming the story into “an accessible yet still ‘oriental’ [product] (Part. 12).” The British cover is the most explicitly offensive because it uses the image of a crying geisha, which mischaracterizes the story because while Mikage experiences grief she is known for her happy-go-lucky attitude. Moreover, the an obvious lack of geisha in the story. The second version of this book, which has a woman lying down and looking at the reader on its cover, is no better because the use of the woman’s gaze projects the “adherence to an incorrect image of Japanese women [as infinitely ready for the sexual pleasures of western men] (Part. 21).”

Since I would not have considered the significance of book covers otherwise, Furukawa’s interpretation is unique and important because it problematizes this categorization and management of “foreign” literature. Especially considering, how Japanese women authors typically have to wrestle misogyny domestically, their stories’ sexualization outside Japan seems to be a new fight for recognition in a different context. Furukawa does a great job in analyzing the covers one by one and the visual evidence is presents is highly compelling.

D. Kellerman, R. (2010). A Room of Her Own in Banana Yoshimoto’s Kitchen. Pacific Asia Inquiry,1,1–10.https://www.uog.edu/_resources/files/schools-and-colleges/college-of-liberal-arts-and-social-sciences/bananayoshimoto.pdf

Kellerman analyzes the symbol of the kitchen as a space Banana uses to question Japanese women’s role in society. He at the same time correlates the concept of the third gender, shojo, with Eriko’s identity as a transgender woman. Kellerman explains how the kitchen is a place more than the woman’s sphere, but rather an intersectional point where young Japanese women face the question whether they should be career women or wives. Mikage uses the kitchen as a place to comfort others, which speaks to her womanly nature, but also a place to comfort herself.

The in-between gender identity called shojo is neither male nor female, but the ideal median who works part-time, yet aspires to be a wife. Her career-oriented characteristics appeal to men and her aspiration to get married to women. Kellerman argues that Eriko’s identity is integral for Mikage to play the shojo role. Eriko is career-oriented, yet her identity as a transgender woman also places her in that in-between spectrum of gender. There is something to be said about how both Mikage and Eriko’s third gender makes them desirable; Mikage and Yuichi’s relationship is a fan favorite, while Eriko dies at the hands of her stalker. Kellerman’s argument signals that the shojo characterization is truly ideal and Eriko was used as a device to uphold that narrative. I do caution members of the LGBTQ+ community who read this novel that there is no scholarly consensus on the reason why Eriko is a transgender woman. It could be to uphold societal norms or to challenge them, that decision is up to the reader to interpret.

Murakami Fuminobu analyzes the use of food as a symbol for the desire for sex in the subverted incestual relationship between Mikage and Yuichi, who went from strangers to siblings through sharing food. While other works use food to represent sex, Murakami argues that Banana uses food as both a mechanism to bring Mikage and Yuichi together as a means to question the construction of family. The most interesting part of his analysis is how he builds off John Whitter Treat’s analysis of Banana’s Goodbye Tsugumi, where the author argues that the incestuous relationship between Yuichi and Mikage is created to get over their grief of losing their family as they try to rebuild one together. Murakami agrees that the desire to once again feel the nostalgia of home and family is the main factor in the relationship between Yuichi and Mikage. Both authors acknowledge that, while Mikage was adopted into Yuichi and Eriko’s family structure and that Eriko mentions her in her will, Yuichi and Mikage still explore the possibility of a romantic relationship. Many works call their relationship incestuous or borderline, and though I agree that they both depend on one another to get over grief, the incestuous reading might be a little too far for my taste. Murakami’s work is dense and takes some time to digest, but his argument is well thought out and backed by other scholarship.

This source is a review of the movie adaptation of Banana Yoshimoto’s Kitchen, though its story is severely changed and so its messaging is again repacked for marketability. The movie takes place in Hong Kong, Mikage becomes Aggie and Yuichi becomes Louie, their personalities are switched and much to fans' disappointment the story focuses on Yuichi instead of Mikage. Mikage is typically seen laying on the floor depressed and unmoving, which is unlike how she was written in the novel. Yuichi was portrayed as more depressed when Eriko died and Mikage was the one who dragged him out of such a depressive state. Kitchen’s popularity has helped diffuse Japanese works outside Japan, but its power and feminist subtexts have suffered through its adaptations and translations around the world.